My Year of Keanu!

January 18, 2020
I know that 2019 the world fell in love with Keanu, and for good reason. John Wick 3 came out, seemingly to be the last in the series which we now know will not be the case. The exciting end to the Toy Story franchise ended with Keanu playing the lovable Canadian daredevil Duke Caboom. He was honoured in the way he always should have been in the hilarious rom com, Always Be My Maybe. And he surprised the world when he came out to announce and share his role in the much anticipated videogame Cyberpunk 2077. And then he had to double down on all of his usual altruism and good deeds of helping abandoned travellers and donating to childrens hospitals. All the media attention reminded the world of why he is so worthy of our love and made him the internet’s boyfriend. And rightfully so, because – Let’s face it! Keanu IS breathtaking.
But here’s the thing: 2019 was not the year of Keanu for me! 2018 was! On one fateful night in 2018 I felt a whole lot of rage for whatever reason (politics ... it was politics) so I treated myself to an action movie to help release that anger vicariously through the harmless but believable violence portrayed onscreen. I hadn't yet seen but had heard good things about John Wick, so I put it on.

MY LIFE CHANGED!!! I can’t explain how or why, but seeing Keanu in that role just reignited all the memories of his past films and the fact that I’ve never actually appreciated him in the way he deserved. Say what you will about Keanu, but the fact is that his skill as a performer is that the guy has serious range, dedication to his craft, a passion for the art he creates, and a humility and attitude that is enviable amongst all of humanity let alone his celebrity counterparts. All my Keanu nostalgia came flooding back to me as I watched him take down 84 guys all because of one posthumously gifted puppy. Keanu is awesome! He’s the most gentle and kind badass you’ll ever find. He would be my guide!
Shortly after watching the film, I had a monthly personal development meeting with my besties and was introduced to this idea of the impossible goal. A goal you know will pretty much never take place, but will nevertheless excite and motivate you to take action, and offer a safe space to practice failure. Without hesitation I immediately came alive at the realization of what my goal was: to someday work creatively with Keanu! I know it’s impossible (even more so now after all the attention he has been getting lately). Fortunately even action steps I started laying out to try to achieve the goal were extremely exciting to me. Mostly because even if I never got to work with him, working towards the goal at least made me excited to try new things and build a level of experience and confidence that would inevitably come in handy in life, and in a moment when I might actually ever be in a situation to meet the guy. And that’s pretty awesome, and what brings us to this blog.
2020 has just begun! And while the world is still in awe of Keanu and everything that makes him awesome, I’m a bit worried this is all just a phase and I and everyone else will let his inspiration be lost and we’ll all just go about our lives forgetting this moment when we remembered why we were in awe of him – BECAUSE HE’S JUST THE BEST!!! So I’m dedicating this year to all the life lessons we can take from Keanu. All the wisdom he has intentionally or passively shared with us through his illustrious career and lifetime. Welcome to my year of Keanu! 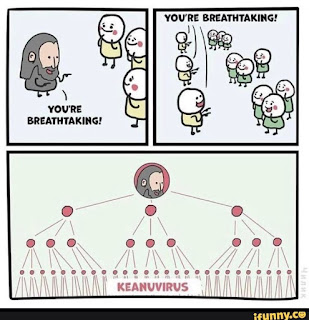 My dearest friend gave me sent me some virtual love recently. It was infectious, and I'm still not over it and I hope I can help spread it around to everyone. It's called the KEANU VIRUS . You really are breathtaking! It's true. Whether dolled up and all fancy pants, or stuck at home in your pajamas and unwashed overgrown hair, you're still breathtaking.  I'm willing to bet you know a bunch of breathtaking people too, don't you? Well now would be a good time to let them know. This is the kind of virus I can get behind. ***NOTE: I had a hard time finding the originator of this actual comic. If anyone knows who it was or can help me find them, I'd like to legitimately credit it because it's just fantastic.
Read more