Showing posts from February, 2020
Show all

February 23, 2020
It's not quite spring yet, but I'm doing my best to get a jumpstart on my spring cleaning. This year I want to do it properly. I'm trying to purge like crazy, because at present there are four of us living in a one bedroom plus den condo, and to say that we're running out of space is a bit of an understatement. In all honesty, we don't have a ton of stuff. We can't. There's no room for it. However - we certainly have far more than we need and definitely more than fits in our current home. We are making it work at present, but I know I would really love to clear out the clutter and keep the joyful and the practical. Right now when I look around, what I see is a lot of the redundant acquisitions that have taken place since I moved out this way thirteen years ago. When I moved out west, I came with literally one suitcase. That's it! That's all I could have. That's all the airline my then partner booked our flights through would accommodate. The
1 comment
Read more

I received a pretty amazing birthday present last year. My husband who is the absolute best and most supportive partner ever, chose to get me a gift to support my love for all things Keanu. He happened upon his poem by Keanu after watching him on Between Two Ferns with Zach Galifinakos.  The poem goes a little something like this: ODE TO HAPPINESS by Keanu Reeves I draw a hot sorrow bath in my despair room with a misery candle burning i wash my hair with regret shampoo after cleaning myself with pain soap i dry myself with my gorgeous white one hundred percent and it will never change towel then smooth on my i don't deserve lotion and i hate myself face cream then I put on my alone again silk pyjamas and go to sleep when the hue has gone blue and you can't quite grin and bear it let this word picture remind you it can always be worse My husband found the poetry book written by Keanu and illustrated by artist Alexandra Grant, now officially k
1 comment
Read more

February 18, 2020
Oscar Night! I used to live for these nights. The glitz, the glamour, the celebration of the best of the past year's films. Now I'm lucky if I even get to see any of the frontrunners and I find that the show airs before I get the chance to realize it's happening. This year was much the same, with one key difference. I knew to keep an eye out for Keanu. My usual distractions were the same as usual. This year I was rather distracted by having my parents in town. I don't get to see them often with the fact that they still live in Ontario and I have clearly laid my roots firmly here on the west coast. That being said, in the rare times I get to see them, I do my best to take advantage of every moment I have with them, and the rest of the world (for better or worse) seems to melt away. I've always been close with my family, which is why it's such an odd feeling knowing that I was the one who put the physical distance between us. You know how some people say home is
Post a Comment
Read more

Work with the people you want to work with!

February 05, 2020
I don't know if you've ever noticed, but Keanu has had a number of repeat co-stars. Sandra Bullock. Charlize Theron. Winona Ryder. Rachel Weisz, not to mention his co-stars of the three major franchises he's been a part of - Bill & Ted, Matrix, and John Wick ... all of which have more movies coming out soon. Ever wonder why the repeats? Because people love working with Keanu! I want to work with Keanu so bad I've made it my impossible goal. I just wish it weren't so impossible. Keanu has made himself an actor people want to work with again and again. Not just because he's talented (which he most absolutely is) but because he's kind, hardworking, professional, and a delight to be around. Sounds like the kind of person I want to work with! Unfortunately my opportunity to work with Keanu is still lightyears away, but I am lucky enough to have other people in my life who fit that same description, and who are just as badass as Keanu is. Legitimately.
Post a Comment
Read more

From Arch to Triumph! 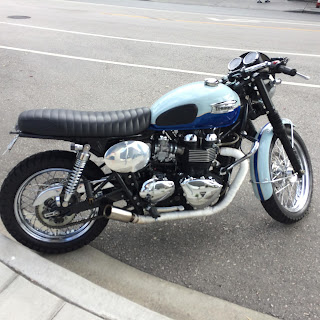 Motorcycles are cool. That's just a fact! Keanu knows this. I know this. My husband knows this. Even my Dad knows this. Riding on the road on two wheels unencumbered by doors, or walls, or general protection from the elements is just awesome. So awesome in fact that Keanu was brilliant enough to up his cool and start Arch Motorcycles . You want a beautiful bespoke cruiser designed and manufactured in California - go to Arch! Now, I don't have a motorcycle. I don't even have a license. But after going on rides with my Dad on his cruiser, and now with my husband on his not meant for two sports bike, I am seriously considering getting a bike of my own someday. So when my husband reminded me that the motorcycle show was in town, I happily packed up the kids and attended with him. He seemed pretty proud to be walking around mentioning we were shopping for Mom. Yeah ... okay. No, Arch was not at the show. They're far to niche for that. Yes, I'd love to ride an arch -
Post a Comment
Read more
More posts