May 07, 2020
I like a lot of people have taken this time in isolation to try new things. There's not a whole lot that can be done right now while we are stuck at home, and yet there are still infinite opportunities to create. To create something from nothing. I remember our first week when our kids were sick and we were stuck with just the groceries we had as we weren't allowed to leave at all for fear of spreading what might have been coronavirus. We ran out of bread but our preschooler really wanted sandwiches. My husband decided he was going to finally put the yeast we had in our pantry to use, and made his own fresh bread. It was about a week later that we realized both flour and yeast were two grocery items that were no where to be found on the shelves, because apparently bread making was the quarantine activity of choice. Who knew? Still - the act of creating that one loaf was awesome and inspired a whole lot more experimenting, creation, and developing new skills.

I decided to work on some embroidery that I'd been sitting on for a while. I had a project in mind that I've wanted to do since my birthday and discovery of Keanu's poetry. It's not pretty. It's heavily flawed. But it was made by my hands, and that's pretty awesome. 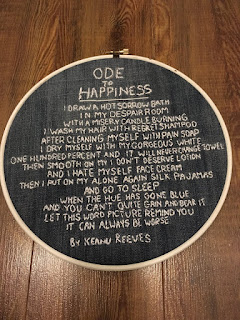 I'm the kind of person who likes to play Devil's Advocate a lot. I like to challenge. and look at both sides (or the many sides) of any controversial subject matter. I feel like it's a way to really tap into the various ideas floating around and suss out all the feelings on all them.  Here's the thing. I've known about the film The Devil's Advocate for a long time. I actually only saw it for the first time last year, and I have to say - as far as Keanu performances go - it is WAY up there for me. I understood immediately why he chose to forego some of his pay so that he could work with Al Pacino. He seemed to really up his game by having Al as a scene partner. And Charlize Theron is just as spectacular as ever. If you haven't seen it - here's a summary - and it has some spoilers so be warned. Keanu plays an extremely skilled criminal defence lawyer who gets recruited by Al Pacino's law firm, so he and his wife (Charlize Theron) make their way to the
Read more